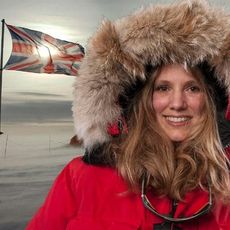 Using fluid dynamics to explore our changing atmosphere and oceans

​Abstract: The atmosphere and oceans are thin films of fluid on the spherical Earth under the influence of heating by the Sun, gravity, and the Earth’s rotation. Thus fluid dynamics is central to many of the processes governing our climate system. For example, if we are to predict the future trajectory of our changing climate we need to understand the fate of the carbon dioxide we emit. A key aspect of that is examining the processes associated with the uptake of carbon from the atmosphere by the oceans, a sink which currently accounts for around a quarter of our total emissions. In this talk I will describe the fluid dynamics associated with this, the work we have been doing to understand these processes and how they might change in the future, and the broader implications of our findings.
Biography: Dr Emily Shuckburgh is a climate scientist based at the British Antarctic Survey. There she is deputy-head of the Polar Oceans Team, which is focused on understanding the role of the polar oceans in the global climate system. Her personal research concerns investigating the dynamics of the atmosphere, oceans and climate using theoretical approaches, observational studies and numerical modelling. She is the principle investigator of national capability project funded by the Natural Environment Research Council, “Ocean Regulation of Climate by Heat and Carbon Sequestration and Transports (ORCHESTRA)”.

She holds a number of positions at the University of Cambridge. She is a fellow of Darwin College, a member of the Faculty of Mathematics and an associate fellow of the Centre for Science and Policy. She is also a fellow of the Cambridge Institute for Sustainability Leadership, which is dedicated to working with leaders from business, government and civil society on the critical global challenges of the 21st century such as climate change, water scarcity and food security.

She completed her undergraduate studies in mathematics at the University of Oxford and a PhD in applied mathematics at the University of Cambridge. She then conducted post-doctoral studies in atmosphere and ocean dynamics at Ecole Normal Superieure in Paris and at MIT. She is a fellow of the Royal Meteorological Society, co-Chair of their Climate Science Communications Group and a former Chair of their Scientific Publications Committee. She is also a trustee of the Campaign for Science and Engineering. She has acted as an advisor to the UK Government on behalf of the Natural Environment Research Council.

In 2016 she was awarded an OBE for services to science and the public communication of science.

She is co-author with HRH The Prince of Wales and Tony Juniper of the Ladybird Book on Climate Change.​
The organisers are grateful to the UK Fluids Network who generously allowed us to use pictures from their website and the various photos competitions they organise